A Room of One’s Own (in a garden in Tottenham)

It seems every day there is a new piece of writing rightly lamenting the high cost of living in London and its effect on artists. In March Nicolas Serota suggested that London’s success as a centre of creativity was at risk due to the ongoing housing crisis. Back in October 2015, Frieze Art Fair hosted a much-critiqued talk called Off-Centre: Can Artists Still Afford to Live in London? In his article for e-flux Morgan Quaintance described the event as “exploitative, offensive and grotesque.” Of course artists can’t afford to live in London – no-one can. It has taken me nearly twenty years to be able to afford to live in London AND be an artist, and what a wretched climate in which to finally be able to do so.

I’ve done many things to try to sustain some kind of practice and intellectual life whilst living in this brilliant, exasperating city. I’ve paid for an expensive studio space/broom cupboard, I’ve had my soul sucked out in corporate jobs, taken courses at the weekend, done a Master’s degree in the evening and another one after being made redundant due to the financial crash. More recently I’ve been scrabbling around picking up work as an itinerant lecturer that (apart from the precarity) I love. I consider myself lucky, very lucky. I was able to access free undergraduate education, I got on the housing ladder fifteen years ago added to which I have a supportive partner with a good job. Without this I could not afford to be an artist, in London, or anywhere for that matter.

At the time of the Frieze talk I was converting a disused garage at the end of my garden in Tottenham into a workspace/studio. The very first night of the conversion there was an attempted break-in for the tools. Despite the anxiety and annoyance caused by the event it also provided food for thought. I was finally carving out a space, both intellectual and physical, just for me, to make my work. The environment in which my studio exists is one of continuing structural and economic decline. The tower blocks of Broadwater Farm are visible from my studio, and the memory of Tottenham’s 2011’s riots still present. In 2013 “the parliamentary constituency of Tottenham had the highest unemployment of any in London.” During London Open House weekend 2015 I witnessed a protest on Tottenham High Road about regeneration and the apparent social cleansing of the area. There is a battle going on for Tottenham, for what it should be, and who it is for. It’s clear that it’s not only artists who are being priced out of Tottenham. 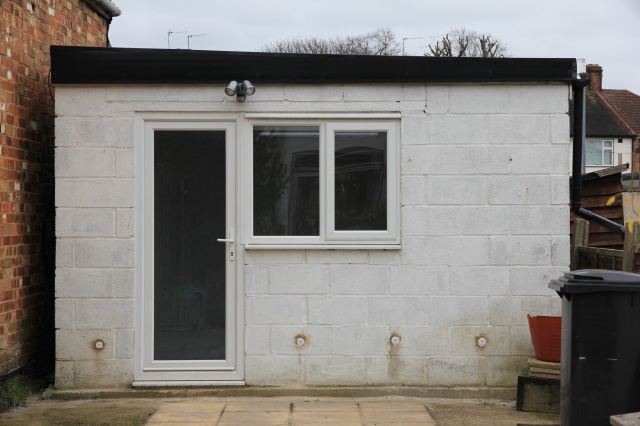 I am an artist and a teacher in higher education. For me art is a re-organisation of stuff that's already in the world.
View all posts by sophiebbarr →
This entry was posted in Artists, London, Musings, Tottenham, Wood Green and tagged Austerity, London, Tottenham. Bookmark the permalink.